Oration quotes for my talk (not all will fit!)

15 Mithridates: "Pico was put in gaol in Castel Sant'Angelo because he wished to reveal secrets that wisemen conceal in mystery and that are not to be given away to asses."
111 3. "...only slightly inferior, as David affirms, to the angels."
111 n.7 Pico accepts the idea of man as a microcosmos, gathering within himself all the elements, mediator and interpreter of the universe (Oration 17 and 27, Heptaplus 5.7 Picatrix 3.5.1). This is also the central thesis of Marsilio Ficino's Platonic Theology, in which the soul is placed between matter and angelic intelligences, but Pico believes that man's calling consists not in the static enjoyment of that position but rather in the dynamism by which the human being is called to transcend the world of images and finally to become one with the Absolute, which is beyond representation.
117 18. "man, this creature of indeterminate image"
121 29. "If he cultivates his vegetative seeds, he will become a plant. If he cultivates his sensitive seeds, he will become a brute animal. If he cultivates his rational seeds, he will become a heavenly being. If he cultivates his intellectual seeds, he will be an angel and a son of God."
121 n.26 Bausi traces this crucial passage to Iamblichus, Protrepticus 5, ...see also Ficino TP 14.3 "It [the soul] lives... the life of the angels insofar as it inquires into the mysteries divine."
127 35. "Indeed, even the most secret Hebrew theology at one time transforms holy Enoch into an angel of divinity, whom they call Metatron, and at other times it reshapes other men into other spirits [numina]."
127 n.33 Rather than referring to a single text, Pico more likely elaborates on a complex, and apocryphal, textual tradition.
135 49. "There, according to the sacred mysteries, seraphim, cherubim, and thrones occupy the first places; let us emulate their dignity and glory, unwilling as we are to yield to them and unable to endure second place."
135 n.49 This is the first time the word "dignity" appears in the text of the Oration. It also appears written in the margins of the Bolognese incunabulum of 1496 and will migrate later into the title.
141 66. "The cherub is the bond of the Prime Minds, the order of Pallas, the overseer of contemplative philosophy. First we must emulate him, thirst after him, and to the same degree understand him in order that we may be raised from him to the heights of love and descend from him, well taught and prepared, to the duties of the active life." (see Heptaplus 6.6
141 70. Dionysius
143 71. "So too, emulating the cherubic life on Earth, curbing the drive of the emotions through moral science, dispersing the darkness of reason through dialectics (as if washing away the squalor of ignorance and vice), may we purge our souls, lest our emotions run amok or our reason imprudently run off course at any time."
[Pico being cautious...]
147 81. "And yet not even this will be enough if we wish to be companions of the angels who hasten up and down Jacob's ladder unless we are first well prepared and instructed to be promoted from step to step, to wheel away nowhere from the course of the ladder, and to face their movements to and fro."
163 103. "In fact, however, not only the Mosaic and Christian mysteries but also the theology of the ancients shows us the dignity and value of the liberal arts, which I came here to discuss."
163 105. "And what can such an initiation possibly signify if not an understanding, achieved through philosophy, of nature's most mysterious things?"
211 189. "In Iamblichus you will be awed by an occult philosophy and the mysteries of the barbarians"
227 214. "I have also proposed some theses regarding magic in which I have shown that there are two forms of magic: one is based entirely on the deeds and powers of demons (and is, in truth, an execrable and monstrous thing); the other, when keenly examined, is nothing but the absolute perfection of natural philosophy."
243 226. "Plotinus also mentions it, where he shows that a magus is the minister and not the maker of nature. That most wise man approves and justifies this kind of magic, so abhorring the other that, invited to the rites of evil demons, he says that it was more fitting for them to come to him than for him to go to them." (see Enneads 4.21.40)
247 230 "The latter has quote profoundly probed into that harmony of the universe that the Greeks more expressively call sympatheian, and has discerned the mutual kinship that natures share. It assigns to each thing its innate charms (which are called the iugges of the magicians) and brings out into the open, as if it were itself their cause, the miracles lying hidden in the recesses of the world, in the womb of nature, in the mysterious storerooms of God. Just as the farmer marries elm to vine, so does the magus marry earth to heaven -- that is, the lower things to the endowments and powers of the higher."
259 Dionysius
269 Kabbalah
Posted by Mr. Hand at 8:10 PM 1 comment:

Zambelli on Pico "manag[ing] to find some formulations"

that distinction has essentially the same purpose as Albertus and Thomas Aquinas's distinction in regard to the duae viae of theology and philosophy, namely to legitimize and render practicable the second way, the via naturalis. Giovanni Pico, who had received Scholastic training (in Padua and Paris) more comprehensive than that of Ficino and other magicians, had managed to find some formulations that would eventually become classic definitions and (like that on magic as "naturalis philosophiae absoluta conummatio", a definition taken from Psellus) would be repeated systematically as late as Della Porta. Butzbach makes use of them when he defends Trithemius.
Posted by Mr. Hand at 5:31 PM No comments:

Thanks to everybody who has looked at this mess of an unfinished project. I haven't been able to work on it for a long time due to my busy teaching schedule and the pain of revisiting my failure to defend it as a thesis. But I do hope to finish it as a little book someday soon. Here are a few tweets I wrote to remind myself where I'm at with it these days...


I would like to see a reading of Pico's Kabbalah as understood through an Iamblichean/Dionysian lens. What is Christian Cabalist Theurgy?

PIco doesn't seem to be using Iamblichus as an authority on magic/theurgy specifically, but as a philosopher with wider theoretical insight.

Problem of understanding Pico's use of initiation language/metaphor in Oration. Philosophy as initation, angel as model, magic as analogy...

Does Kabbalah for Pico stand in relation to magic as higher theurgy stands to material ritual in Iamblichus/Dionysius?

How many magics are present in Pico's 900 conclusions?

Does Ps.Dionysian theurgy offer a solution to problem of understanding Pico's magic, or must we look
elsewhere for its specific domain?

How does the encounter that Aquinas had with Platonism of Dionysius/Proclus compare with the one that Pico had with D./Iamblichus/Proclus?

Hegel on Pico in History of Philosophy

Two counts of the name of Pico della Mirandola — Giovanni, and Giovanni Francesco, his nephew — were influential rather by virtue of their marked personality and their originality; the elder propounded nine hundred theses, fifty-five of which were taken from Proclus, and invited philosophers one and all to a solemn. discussion of the same; he also in princely fashion undertook to pay the travelling expenses of those at a distance.
Posted by Mr. Hand at 5:53 PM No comments: 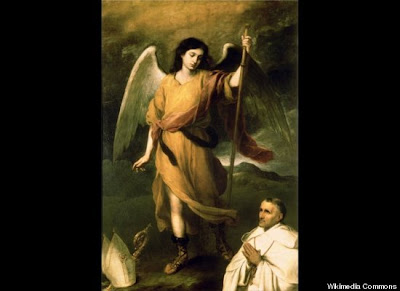 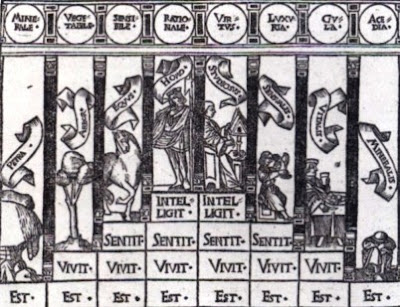 here's a little site on the Iconography of Aquinas
Posted by Mr. Hand at 11:58 PM No comments: